I had five children in seven years. Hungry babies, teething toddlers, and preschoolers with vivid dreams left me intensely sleep-deprived for about a decade. All parents know this season. It is a time of sacrifice and love that we expect and accept. But even so, the pain of exhaustion is real. My mom likes to recount with a laugh the habit of taking sleep inventories I picked up during those baby years. I don’t really recall it (there’s a lot I don’t recall from that time) but she says that in nearly all conversations I would, after a short bit of small talk, ask everyone how much sleep was had the night before. I don’t know why I would do that. Maybe I was looking for another sleepy friend with whom I could commiserate. Maybe I wanted to live vicariously through a well-rested soul. What I do know now, on the other side of that season, is that I will never underestimate the blessing of sleep again.

I learned by its absence to appreciate sleep. Suddenly dead-tired, I realized that I had taken a delicious gift for granted—for years! But, if I had been paying attention, or perhaps if someone had pointed it out to me, it wouldn’t have taken being a drowsy parent to realize the simple mercy of nightly rest. Had I been more alert, I would have seen the recurring theme of sleep in classical literature, and the countless references offered of sleep as a precious gift from God.

We have long recognized sleep as restorative, natural, and necessary. And if you really want to dig into all the fascinating details of sleep and its benefits, may I forward a suggestion given to me, Why We Sleep by Matthew Walker, PhD and sleep scientist? But for those with book piles that are teetering already, you don’t need a book on sleep science to gain appreciation. Our canon of great works routinely reminds us that sleep is a heavenly reprieve from the weighty trials of the world, “the blessed boon,” as Odysseus calls it.

It is true that sleep in literature is sometimes given as a cover for malicious or deceitful actions (the goddess Sleep permits Hera’s trick on Zeus in the Iliad, for instance). Likewise, sleep can be fitful, restless, and filled with anxiety-producing images of real or imagined events (as Shakespeare often shows us). But in many of our stories, sleep is given by God and the gods as a mercy. It is a temporary relief from the daily dragon-slaying of everyday life.

In the Odyssey, two paragraphs side by side give us clear insight on the topic. Odysseus is granted “a very deep slumber that eased the burden of his sorrows” and Penelope acknowledges that “no matter how much people may grieve by day, they can put up with it so long as they can sleep at night—for when the eyes are closed in slumber, people forget good and ill alike.” 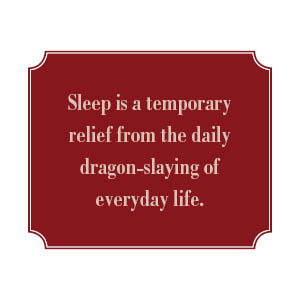 The Divine Comedy offers this lesson by contrast. In the opening lines, Dante wakes from “sleep” to meet the difficult realities of life: “Midway this way of life we’re bound upon, I woke to find myself in dark wood, where the right road was wholly lost and gone.” The “rude and rough and stubborn forest” is a “bitter” shock to Dante because, by the oblivion of sleep, he knows not how he arrived there. From here, he will arise and begin a fantastic journey from waywardness to his gleaming True Home.

This theme of sleep as a reprieve carries on in more modern literature as well, especially by authors who were well-informed by the classics. In The Magician’s Nephew we see Aslan grant the Professor sleep as he struggles with the consequences of his sin. Aslan says:

But I cannot tell that to this old sinner, and I cannot comfort him either; he has made himself unable to hear my voice. If I spoke to him, he would only hear growlings and roarings …. But I will give him the only gift he is still able to receive.

Aslan then turns to the Professor: “Sleep and be separated for some few hours from all the torments you have devised for yourself.”

Frodo also receives the gift of slumber as a balm for his distress. In the beginning of The Fellowship of the Ring, he is anxious about his upcoming journey, specifically the threat posed by the menacing Black Riders who appear to be following him, but about whom he knows little. He asks of Gildor, “But where shall I find courage? That is what I chiefly need.” Gildor comforts him: “Courage is found in unlikely places … Be of good hope! Sleep now!” Obediently, Frodo “threw himself upon a bed and fell at once into a dreamless slumber.” And, “In the morning Frodo woke refreshed.”

In Charlotte’s Web, Wilbur finds himself “friendless, dejected, and hungry” after his move from the Arable home and the protection of Fern.

This was certainly the worst day of his life. He didn’t know whether he could endure the awful loneliness any more. … [O]ut of the darkness, came a small voice he had never heard before. “I’ll be a friend to you. Go to sleep. You’ll see me in the morning.”

In a single moment Wilbur is doubly blessed with the promise of sleep’s relief and an unexpected new friendship.

In The Wind in the Willows, sleep proves protective against both emotional and physical affliction. In the brilliant chapter “The Piper at the Gates of Dawn,” Rat and Mole have a miraculous encounter with “Nature” while searching for Little Portly, who is the pride of his anxious Otter father. After having been missing for days, unable to swim, fascinated by the weir, and vulnerable to “traps and things,” Little Portly is discovered safe from and unharmed by the many dangers that surround him. He is found asleep “in entire peace and contentment” and immediately Rat and Mole, after all they had experienced, “bowed their heads and did worship.”

G. K. Chesterton punctuates the significance of sleep as holy. In The Innocence of Father Brown, he says, “Do you know what sleep is? Do you know that every man who sleeps believes in God? It is a sacrament; for it is an act of faith and it is a food.”

And C. S. Lewis in A Grief Observed insightfully points out that “You can’t, in most things, get what you want if you want it too desperately …. ‘I must get a good sleep tonight’ ushers in hours of wakefulness.” When reminded, we know this to be true. Sleep is not a servant to be summoned, it is a blessing that is bestowed. We should recognize it as the Godsend that it is.

It is these joyful insights and connections in literature, supported by our own experience, that make us better, more grateful people. Literature, when thoughtfully read, carefully contemplated, and deeply discussed with wise peers, points us toward what is truly miraculous in the most common experiences of life. Literature reminds us to appreciate the everyday gifts we routinely take for granted. John 3:27 reminds us that “A man can receive nothing, except it be given him from heaven.” How grateful am I now, every single morning, for the gracious gift I was just given. How certain am I now that unconsciousness itself is worthy of praise.